The Community Daze Horseshoe Tournament was a success on Saturday in East Carbon. Sixteen participants competed in a singles tournament and 17 teams played in the doubles event.

After several hours of singles play, the following individuals placed in the top three:

Despite a 30 minute rain delay, the doubles tournament had a great turnout. In the end, the following teams finished in the top spots:

The next horseshoe tournament for local enthusiasts will be conducted this Saturday, July 19 at Wellington Pioneer Days. Registration will begin immediately following the parade, which begins at 10 a.m.

At this tournament, participants will not be allowed to use their own horseshoes. The Wellington Pioneer Horseshoe Director will provide horseshoes for all participants. 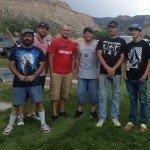 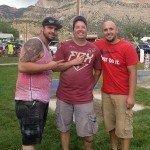