The conclusion of the input that the Community Economic Council has been receiving from those in Carbon County was met on Thursday evening as a community presentation was hosted in the Jennifer Leavitt Student Center on the USU Eastern campus.

Helper City Mayor Lenise Peterman and Nick Kiahtipes represented the council and welcomed all to the presentation, which was featured in a slideshow format for those in attendance. The council was put together following the Lewis Young Robertson & Burningham Inc. study conducted in August of 2018.

This study stated that the county had a lack of skilled workforce, there was a negative perception of the area and more. Following this, the council hosted consistent meetings and created a recruiting video for those that are interested in joining the effort.

Lately, the council has focused on workshops and a survey that gathered input from more than 700 members of the community. From this community interaction, three main topics were gathered: community building, economic development and beautification.

Residents in the area expressed the need to live a healthy and active lifestyle with more events and amenities or a stronger output of those already hosted. Building a sense of place was also listed as important to many.

One recommendation was community classes such as cooking, hobbies, resume writing and more. These classes engage citizens and teach valuable skills. A dog park was also recommended, which adds value to visitors as well as community members and is a great gathering place. Creating social groups came to the forefront of recommendations as well.

These groups would welcome those that are new to the area and give community to those that have had those close to them move away. These groups can take many forms: recreation, service, social or a combination of all three. One form of these groups do exist in Carbon County in outdoor groups.

Many in Carbon County also expressed their concern for youth mentoring. With mentoring, youth are more likely to attend college, less likely to suffer from social anxiety and less likely to engage in drug and alcohol abuse. Mayor Peterman and Kiahtipes were sure to point out ways that these suggestions may already exist.

Existing social groups such as parenting groups, mentoring avenues such as one hosted at Pinnacle Canyon Academy and sports teams through Carbon Recreation, among other avenues, were all mentioned. Citizens stated their concern with not knowing what is going on in their city or town.

Mayor Peterman encouraged attending and hosting an event more than once to build momentum. Utilizing local media by submitting flyers for events and checking community calendars is also pertinent.

From there, Kiahtipes and Mayor Peterman continued into the other input received from the survey such as job diversity, tourism, taking an inventory of public amenities, tactical urbanism, public art and more. Mayor Peterman also spoke on grants and the great opportunities they can bring to cities and towns in many ways. The overwhelming response to beautification was caring for the city and showing that it is loved and enhances quality of life.

As always, historical preservation was noted as utmost importance to nearly all that engaged in the survey. Mayor Peterman concluded by stressing that the community needs to get involved by reaching out and signing up for the council. An array of skill sets are needed.

“People want to make our communities better, so we just need to give them avenues for how they can participate and do that,” Peterman stated. 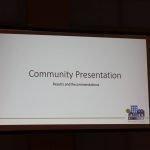 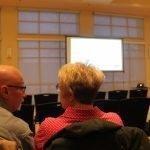 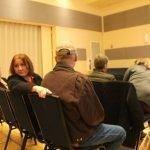 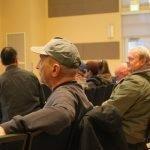 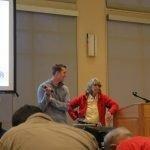 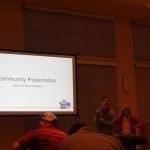 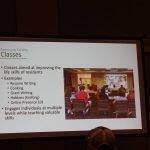