Many members of the community gathered in the Carbon County administration building in Price on Saturday morning as Governor hopeful Greg Hughes hosted a meet and greet session. Hughes began the session by reminding all that the caucus meetings will begin on March 24, then thanked the attendees for coming on a Saturday morning.

He expressed that this is a big year for politics and it is important to have people engaged. “If you’re here on a Saturday, that means you’re an opinion leader,” Hughes stated.

He continued by stating that there is a deep pool of good candidates that are running for Governor, which Utah should have. Hughes wants people to know where he came from and that he does not shy away from the hard things. He said that he has a track record with actions that match the words and position he shares.

Hughes then gave a background of his life, stating that his mom was a single mother and a photographer, and he grew up in a blue collar neighborhood outside of Pittsburgh. His mother took care of him but had a hard time paying bills and making ends meet. With this upbringing, he knows what it is like to struggle through hardships.

Hughes came to Utah and found a state to receive an education, get married and start a small business. He explained that the state has treated him very well and is very different than the world that he grew up in. Hughes has been married for 25 years and has three children.

Hughes then went into some of his political history, reflecting that one of the toughest political battles he ever faced was opposing the Obamacare expansion. Hughes stated that it was not just the media attacking him and the democrats that were angry, there were republicans that was supporting Obamacare and pressuring the rest. He explained that federal funds are not free and the way it works is that the state dollars are controlled.

Hughes emphasized that under so much pressure, he was still successful in killing Obamacare in the house. It was a tough environment, but he accomplished it.

He was in the house for 16 years and as a speaker he learned that two things are contagious: fear and courage. He said that any question he is asked, he will tell the truth and that the brutal part of honesty does not offend him. Hughes was the highest elected official to support President Trump in March of 2016. He believes that the upcoming election is a choice between socialism or capitalism.

“This state will stay as it’s been. It’s going to be a strong republican state,” Hughes assured.

Utah needs a governor that will work well with the president and a governor that is going to be committed, according to Hughes. The state has unique opportunities and the sky is the limit, but it is going to be difficult. Hughes spoke on being pro life and the importance of the second amendment. As he opened the question and answer portion of the session, he was question on his feelings of the NRA, education and more. He was eager to discuss the inland port, examples of the president helping Utah and more. 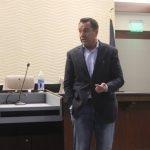 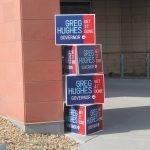 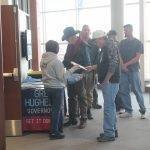 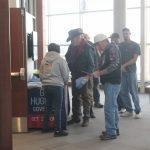 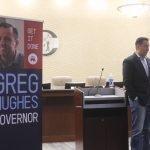 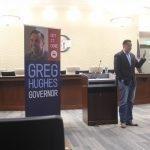