The time has come for adaptive equipment to be installed in a playground in Carbon County. Two local community members, Valorie Marietti and Alicia Fulcher, made the decision to take action and see what could be done to get the equipment installed.

Valorie is mother to Jace Marietti and Alicia is mother to Nick Fulcher. Both of these women’s sons have limitations to what they are able to do on a normal playground. These boys have family and friends that would like for them to be able to come and play with them and the mothers are disappointed at having to watch their sons sit on the sidelines and watch the other kids enjoy the playground.

The feeling is that if more handicap accessible equipment were available to the public, more families with special needs children would be out enjoying the things provided for the public. Currently, there are no playgrounds in the area with equipment that can be deemed safe for children such as Fulcher’s son that have no control of their own bodies. Although there are handicap swings in the area, there are none that have protective straps that hold the child in place.

The duo has contacted Price City Councilman Layne Miller, who is prepared to help with the situation in any way possible. Also contacted has been Lois Boomer, who is the Health Department mobility specialist, Senator David Hinkins, Representative Brad King and Carbon County Commissioner Casey Hopes.

“My goal is to have a playground that can accommodate all of our children,” said Marietti. “Many families that have special needs children also have typical children. Children learn what they see, and we need to show them that all kinds of kids can play together.”

“Once I found out Nick’s diagnosis, I said I wanted to give him every opportunity of a normal life as I could. Even if it meant he needed a little extra help,” Fulcher explained. “I just want to be able to play with him at the park just like any other parent does.”

Marietti urges anyone else in the community with a special needs child to come forward to community leaders. 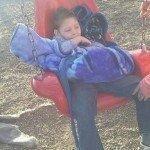