On Thursday, Aug. 26, Kabul Airport in Afghanistan experienced devastation when a suicide bomber took the lives of 13 service members and wounded many others in an attempt to harm those that were trying to evacuate.

Among these was Corporal Wyatt Jay Wilson, who is a local to the Carbon County area. The blast, for Wilson, resulted in a collapsed lung, broken jaw and multiple shrapnel wounds to his legs. Wilson was flown to Walter Reed National Military Medical Center and has undergone surgery for his injuries with more scheduled.

As usual, the community has rallied around this tragedy in more than ways than one to show support for Wilson and raise funds for his family. Wilson is a graduate of Carbon High School and last week the school gathered to honor him.

Carbon High Vice Principal Steve Pay stated that he thought it was incredible to show that support and see all of the current students supporting a Dino in a situation like this. He remarked that, no matter how far away something like this takes place, it is always close to home.

A fundraiser has also began in the form of shirts that were created in Carbon blue to support Wilson. There is a wide array of sizing options for these shirts and the payment can be accepted multiple ways. Those that wish to obtain a shirt must order no later than Sunday, Sept. 12. More information on these shirts may be found on Facebook.

There is also a GoFundMe account that has been created for Wilson and his family that has garnered more than $20,000 in donations. Wilson will require more surgical work and many hours of therapy to recover from the bombing, and members of the community are hoping to relieve some of the financial burden that he and his family will face. 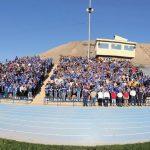 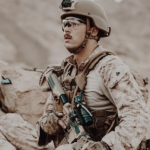