Though the Helper City Council usually gathers in the city hall for its scheduled meetings, a change was made on Thursday evening to accommodate Utah Congressman John Curtis for a town hall.

Beginning the evening, Congressman Curtis praised Helper City Mayor Lenise Peterman. He stated that though he believed that he had been a good mayor, he did not do a fraction of what Mayor Peterman accomplishes.

The congressman then gave a brief history of himself, explaining that he grew up in Salt Lake City and met his wife at the junior prom. They were married and he served his church in Taiwan, also living there for some time with his spouse. Congressman Curtis returned to Utah about 25 years ago and wanted to be an entrepreneur, leading to his business of designing and building shooting ranges across the world.

Following the sale of the business, he looked for his next big thing and made the decision to run for mayor of Provo City. He was mayor for eight years and loved it, stating that the happiest days of his life were as the mayor. He explained that it is extremely satisfying to see the impact and results of your work on a community level.

Curtis then launched into current topics, stating that the district went through a radical change with the re-districting. He said that the one thing that is predictable in that situation is that a lot of people are going to be unhappy and somebody will cry gerrymandering. The congressman then said that the outcome is pretty well solidified and there are no predicted changes.

Mayor Peterman next asked him what he would say is his biggest accomplishment in DC in the past four years. He said that there are a lot of things he feels really good about, but one of the things is the Emery County Public Lands bill.

Turning to the top three concerns that are facing our nation today, Congressman Curtis remarked that social media distorts, making it almost impossible to navigate the truth. He then said the three concerns, in no certain order, are inflation, energy and the war. He also stated that all of them are uniquely tied together.

In terms of energy, Congressman Curtis stated that no community should take a nuclear plant that does not want one, but he is aware that Green River would love one. Each community, according to Curtis, should be able to make that decision. He also said that it is not the nuclear that everyone grew up with. At the San Rafael Research Center, they have discussed that there are those that believe they can get nuclear waste to zero, and that research is happening right in our own backyard.

Focusing on the Ukrainian/Russian war, he said that when the war began, there was not a military expert that thought that Ukraine would last a week. Based on what had happened with Russia in previous situations, that is what was expected. The posture of the United States was helpful, but a bit reserved.

However, several weeks ago, that changed and a difference was viewed in approaching Ukraine. The military experts changed their minds and said that Ukraine could win this, which is very good not just for Ukraine, but for the world as a whole, according to the congressman.

Suddenly, diplomats are being flown across the world and there is a steady increase in the types of weapons that are being given, allowing the Ukrainians to be a bit more than defensive. Though this is positive for Ukraine, Congressman Curtis stated that with the tragedy, damage and life loss, there is no way that it can truly be called a win.

He then stated that if Ukraine can get back close, if not complete, borders and Russia is no longer a threat to them for some time, it can help the world as Russia would be weakened in a sense.

“I believe in the US, we are far enough removed from the sacrifice for freedom that we don’t have a good enough appreciation for the cost of freedom and for the value of freedom,” said Congressman Curtis.

According to Curtis, this is a unique opportunity for Americans to see the true cost of freedom and Ukraine should inspire all of us to value what we have in the United States. He frets that children are not taught enough about the greatness of our country and, even on the worst day, that it is better than any other place in the world.

Regardless of what side an individual finds themselves on, Curtis stated, that principle is incredibly important as there is a need for the Supreme Court to interpret the constitution. Congressman Curtis acknowledged that it does feel as if Roe versus Wade is going to be overturned, though that does not mean that there is no abortion across the land. The decision would go to the states.

The congressman then spoke with those in attendance on a number of other topics and questions, such as water usage, additional energy opportunities and the like before thanking all for attending the town hall and concluding the evening. 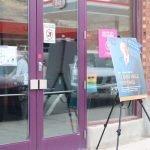 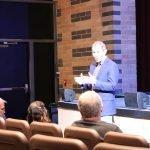 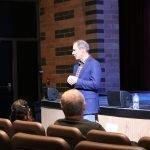 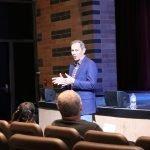 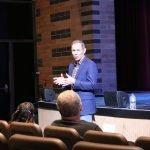 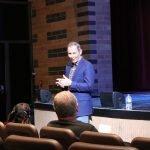