Bright and early on Friday morning, fifth grade students of Sally Mauro Elementary could be found in the gymnasium to root on their classmates as they participated in the school’s annual Constitution Bee.

As tradition, each fifth grade class hosted their own individual competition before gathering finalists that would compete school-wide. Eight students were chosen to participate in front of their classmates. At the beginning of the event, Principal Jarad Hardy took time to recognize three students. These students submitted a question to the attorney general on Constitution Day. This task awarded them with $5 each. The students recognized were Ella Anderson, Carter Richardson and Neeley Robertson.

The competition then began. Questions were asked by Lions Club representative Leonard Miller. Students were grilled on questions such as “What are the qualifications to serve as president of the United States?” Once the number of contestants dwindled down to three, the options were switched up, adding multiple choice questions into the mix.

The three finalists were Ella Anderson in first place, Neeley Roberston in second and Mario Vasquez in third. The students were awarded with $50, $30 and $20 respectively. 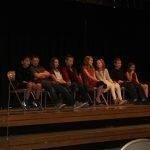 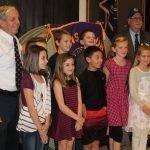