Carbon Superintendent Lance Hatch explains how the district prepared over a weekend to keep kids learning after the school dismissal on March 13.

When the school dismissal was announced on March 13 by Governor Gary Herbert, all school districts had only a couple of days to develop plans to educate students long distance. Teachers and administration had to create innovative ways to make sure the learning didn’t stop. While the district did have some experience in distance learning and remote instruction, doing it on the scale that would be needed took a lot of ingenuity and grit to get it done.

“The announcement was made about an hour before school was to be let out on that Friday and the first thing we did was call up the two middle school principals to see if they could send Chromebooks home with all the kids,” said Superintendent Lance Hatch. “There was a pause on the other end of the lines as the principals thought about how challenging it would be to accomplish this in only two hours, but they said they could do it.”

While Carbon High School students already had one-on-one devices they could take home, the middle schools kept theirs at school overnight and the students used them during the day. Middle school personnel were able to take the charging carts the devices were kept on apart and provide all the students their own devices.

“We got a call just about the time school was out and they said it was done,” said Hatch. “They were able to meet the deadline.”

For elementary schools, there was a different problem. There were not enough devices, so they would have to rely on homes having computers and internet service to work with students. By that next Tuesday, there were also a lot of paper packets prepared for students to pick up and take home to use.

However, there was another problem: some students didn’t have internet service at home because of economic reasons.

“Emery Telcom said they would provide service for free during this time so students could have the service they needed,” said Hatch. “I have never seen a private company step up like they did on this.”

So, now a month into long distance home instruction, how is it going? While it isn’t like having kids in their seats and teachers in their rooms, things are moving along and learning is progressing. Teachers have come up with many inventive ways of instructing students, including using Google classroom, chats with students and parents daily both on the telephone as well as with devices, and paper packets as well.

It is a challenge, but the district has met it and student learning is moving ahead. 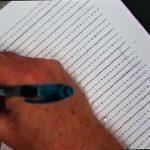 Castle Heights Elementary teacher Steve Lasslo instructs students on proper printing and writing using video over devices that are connected to the students’ homes during the dismissal.