PacifiCorp, by and through its wholly-owned subsidiary, Interwest Mining Company as mine manager, with a street address as 15 North Main, Huntington, Utah, has filed with the Division of Oil, Gas and Mining an application for Phase I Bond Release for 29.37 acres of the Cottonwood/Wilberg Mine Complex and remote permit areas.  Its permit for operations pertaining to surface and underground mining activities was approved on July 6, 2014 (revised May 18, 2015) for the following areas: 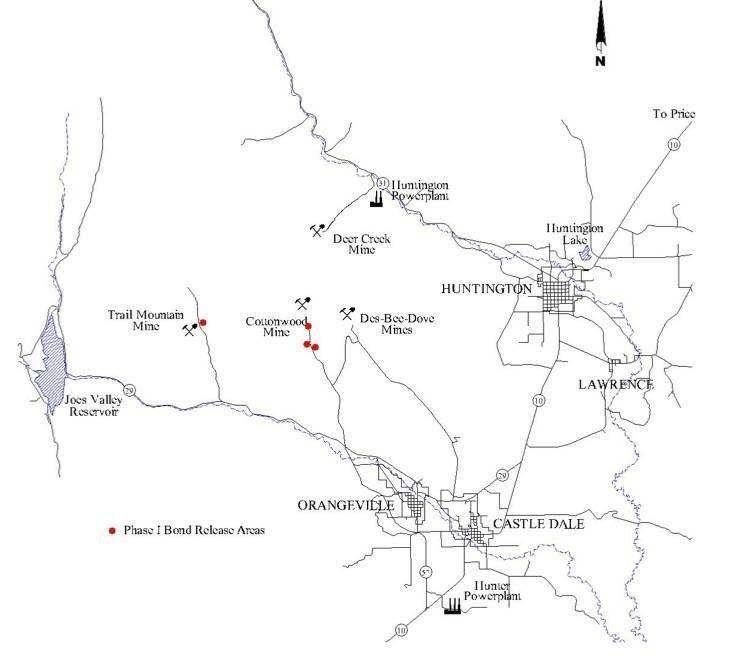 Underground mining operations at the Cottonwood and Wilberg mines were terminated in June 2001.  All portals were sealed at that time.  The mine remained in a state of temporary cessation from 2001 to 2014.  In 2014, final reclamation was completed at the Trail Mountain Access (TMA) and belt portal area located adjacent to the Trail Mountain Mine in Cottonwood Canyon.  Demolition activities of the Cottonwood/Wilberg mine complex was completed in 2015.  In March of 2018, final reclamation for the remaining disturbed areas of the Cottonwood/Wilberg mine were completed in the left and right forks of Grimes Wash and the rock and soil storage area located approximately ½ mile to the south of the mine site adjacent to SR57.

Phase I Bond Release can be considered after the applicant has demonstrated to the Division that all reclamation requirements for backfilling, regrading, and drainage control measures have been satisfied.  Topsoil has also been replaced, drainage channels have been constructed, and sediment control measures (including revegetation) have been provided at all of these reclaimed sites.  PacifiCorp asserts that it has satisfied the Phase I Bond Release requirements.

The approved reclamation bond for the Cottonwood/Wilberg Mine amounts to $2,443,081.00.  A surety bond has been filed with the Division and is payable to the State of Utah, Division of Oil, Gas, and Mining (UDOGM), and the Office of Surface  Mining Reclamation and Enforcement (OSM).  PacifiCorp is requesting a release of 60% ($1,465,849.00) of the reclamation bond as allowed by the Utah Coal Regulations.

A copy of the Phase I Bond Release application may be examined at the office of the Division of Oil, Gas and Mining, 1594 West North Temple, Suite 1210, Salt Lake City, Utah 84114-5801 and also at the Recorders Office located in the Emery County Courthouse in Castle Dale, Utah. Written comments, objections, or requests for an informal conference may be submitted to the Division of Oil, Gas, and Mining address above. Said comments must be submitted thirty (30) days from the date of the last publication of this notice.

This notice is being published to comply with the Surface Mining Control and Reclamation Act of 1977, and State and Federal regulations promulgated pursuant to said Act.