Photos are of Phase III, the Blue Cut Canal.

The Cottonwood Creek Irrigation Improvement Project received Salinity funding to begin the project in 2010. Phase 1, Clipper Western, which includes the Western and Clipper Canals, is complete with about 80% of irrigators having hook-ups to the system and online. Approximately 20% of irrigators are still having difficulties with the NRCS, but issues are expected to be resolved soon.

Cottonwood Creek Irrigation applied for Salinity Funds in November of 2012 for the remaining three phases of the project. Of the $14 million the project needs, the Bureau of Reclamation will grant $5 million over the next three years. They were able to raise $6.5 million from other sources and borrowed the remaining $2.5 million from the Board of Water Resources. Payments on the loan will begin next December.

Phase III, Blue Cut Canal, is currently under construction with Nelco and is 30% complete.

Organizers of the projects expect to begin looking for contracts for Phase IV, Upper Mammoth, early this fall and Phase V, End of Mammoth, the following year.

President of the Cottonwood Creek Consolidated Irrigation Company Craig Johansen reports that the project is on schedule and within budget. 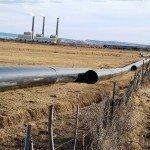 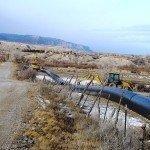 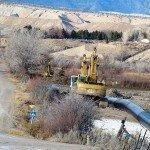