Six students were selected from the many nominations submitted by the faculty and staff and sent to the Orangeville City Council, where an overall winner was chosen. All six students were recognized at a school assembly and received gift certificates to local businesses.

Mayor Swenson then announced that Jaden Reed was selected as the second term Mayor’s Award winner. Jaden was presented with a check and a second check for $50 was presented to Mrs. Norton’s classroom to be used how the class decides.

We are very proud of Jaden and his excellent example. 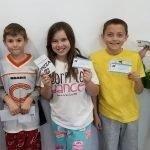 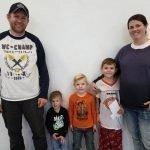