John King has been writing and performing country music since he his adolescent years and has spent nearly half of his life touring, starting in the southeast.

Following his college education at the University of Georgia, King made the move to Nashville and has resided there for around five years.

“I love this, I love country music, I’ve always been a fan first,” King enthused.

Thus far, King stated that he is hard-pressed to pick a single favorite part of his career. He loves writing songs and has had success writing for others such as well-known artist Randy Houser. He also credits being on stage each night as a favorite but states that his fans would likely be the favorite part of what he does.

King will be playing over 100 dates this year, opening for many famous names. He states that it has been a big year already with some great festivals and tour dates throughout the country with big names.

“It’s awesome to step on stage to people you look up to,” King stated.

In June, King visited the Grand Ol Opry, which was his first time that he was able to bring his whole family backstage with him and was able to debut a new song on the famous stage.

On the theme of family, King has been dating his wife since they were 15, making them high school sweethearts. He credits his wife as being his biggest believer and influencer, other than his parents. Following their move to Nashville, they gave birth to a baby girl. He states that his parents were the main influence as to why he got into music and songwriting. His brother even plays the drums for him.

“My family is a huge part of what I do every day,” King said.

King graced the Green River community on Saturday evening with a great performance in conjunction with the Melon Days festivities. When prompted on what drew him to Green River, he stated that he spoken to the people there for a few months and believed them to be great folks.

He believes that there are a lot of country fans in the area. King also stated that he is a big outdoorsman himself and knows that it is “God’s Country” for that and was excited to see how it was personally.

He always urges those that attend his shows to come ready to dance and have fun. 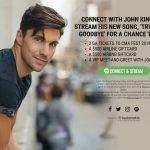 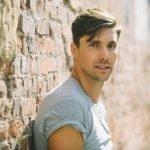