The Department of Workforce Services (DWS) has released its local winter insights for Utah. These insights provide current economic and labor market analysis for decision-making in the areas of economic development, regional planning and more.

The insights are comprised of four sub-products, which are county snapshots, regional snapshots, annual profiles and local economic commentary. For the Carbon County economic snapshot, DWS focused on the year-to-year change in non-farm jobs since September of 2020.

The newly-released third quarter data gives insight into the continued effects of the COVID-19 pandemic on the local economy. The unemployment rate of Carbon County peaked in April at 9.7% while job losses initially fell by 4.6% from April of 2019. The county ended the second quarter with a 2.6% drop in employment from September.

This is slightly above the statewide average loss of 1.5% employment. The loss of jobs corresponded to 235 total positions with the largest losses occurring in the mining sector. This was followed by government, education/health/social services and trade/transportation/utilities.

It was reported that the remaining sectors remained mostly flat. In comparison to other counties in the state, Carbon County finds itself in the middle of the pack with job losses due to the global pandemic. Carbon County fared better than the US average, which is a loss of 6.4% of employment within the past year.

For Emery County’s snapshot, it was reported that unlike much of the state, the county has already returned to positive job growth in the third quarter.

Between September 2019 and September of 2020, 218 jobs were added in Emery County. This is the highest rate of job growth in the state of Utah at 6.9% with nearly all of the growth coming from the construction industry.

Construction added 197 of the jobs while trade/transportation/utilities and education/health/social services assisted. Government also added jobs to the county. 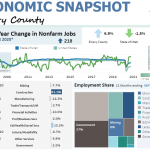 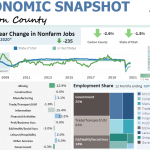