Based on the state’s new Level of Transmission scale for COVID-19, Carbon has been deemed moderate with Emery deemed low on the scale. Grand County also sits at moderate according to the Southeast Utah Health Department’s COVID-19 update on Thursday evening. Health guidance for all levels can be viewed here.

Thursday’s report also announced 15 new cases of the virus in the region. This includes six cases in Carbon County, five in Emery County and four in Grand County.

Carbon County leads the region with 192 total cases, 33 of which remain active as 158 have recovered. The lone death in the county came on Sunday when a man in the 65-84 age range that had been hospitalized passed away. Four Carbon County patients are currently hospitalized while seven others were formerly hospitalized.

Grand County has recorded 97 cases of COVID-19, 17 of which remain active as 79 have recovered. One Grand County patient is hospitalized at this time while two others were formerly hospitalized. One patient, a Grand County man over the age of 85, passed away due to the virus. 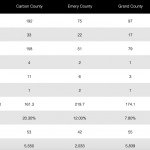 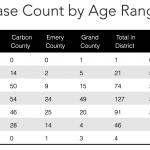 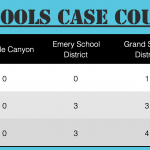