As the coronavirus pandemic continues to move throughout the nation and the world, the ripple effect appears endless. By now, everyone is familiar with the terms “social distancing” and “flattening the curve.” In an attempt to avoid contact with one another, drastic measures have been taken, forcing many activities to be cancelled and businesses to shut down. One widely discussed impact of the virus is on the economy, but its sting goes much further.

With large-scale cancellations, including March Madness, and postponements of the NBA, MLB and other professional sports, the COVID-19 presence is felt. There is plenty of national coverage on the impact of these events and leagues, but perhaps one aspect that is not adequately addressed is the effect on high school student athletes.

Emery track star Braiden Ivie generously took some time to provide his perspective of COVID-19’s incredible reach. After endless training and hard work during the winter indoor season, Ivie was primed and ready for a stellar senior campaign. He broke the 200 M indoor state record in 2019 and had his sights set on breaking more records this spring.

However, Ivie wasn’t just working to be the fastest sprinter in the state for his second consecutive year or win back-to-back state titles in the 100 M and 200 M dashes; he was planning on putting his name in the record books. It is worth noting that Dallin Draper (Delta) set the 200 M statewide record in 2018 at 21.12 while Brian Hazelgren’s (Murray) 10.47 100 M time back in 1981 still stands as the fastest in the state.

Ivie reflected how he felt once he heard the news that the track and field season was put on hold. “My heart kinda sank. I had a lot of goals set and I was disappointed.” Although the season is in limbo, Ivie continues to prepare himself. “I am doing my private training with hopes that the season resumes. If it does, I will be ready. I am undaunted by the situation.”

Ivie, like many high school athletes all over the nation, is endlessly working and holding out hope to compete. He has been receiving workouts from his club coach, Shaun May of Gold Medal Athletics in Provo.

Most recently, Ivie competed at the Snow Canyon meet in St. George and took first in both the 100 and 200 M events. Nationally, Ivie is currently ranked fourth in the 100 M and third in the 200 M. There was an upcoming meet scheduled to take place in Arcadia, Calif. for the top runners in the nation, but it has since been cancelled.

Athletes are not just sidelined from their sports, but have been forced home to complete packets from school in what surely feels like complete isolation to teenagers. “School is busy and hard. Teachers don’t have just one class; they have to deal with all of the students from all of their classes at once,” said Ivie. “I feel bad for them; it is hard to get help when you need it. Socially, it has been tough too; it’s like a ghost town.”

The compound effect of closing the school doors appears to go deeper and deeper. Students are not just removed from school and the activities that they enjoy. For many, their outlets are gone, leaving them troubled. Ivie opened up about this aspect of life amid the pandemic. “I feel like a lot of my support has been cut off. I can’t go to school and socially interact. Religiously, meetings have been cancelled. It leaves you to ask, ‘what is the point?’ It’s hard to stay motivated. There are no friends or athletics to support you; it’s hard to deal with.”

When asked what he is doing to combat those difficulties, Ivie responded, “I’m keeping my college goals in mind. I still have my family and I have been reading a lot of mentally motivational books. I’ve been studying a lot more mentally than ever before.”

There is no doubt that the abrupt halt of the spring season and school has been tough to swallow, but with everything that is happening, Ivie considers himself to be fortunate. “I have my scholarship to run for BYU next year. I also have the opportunity to increase the amount of my scholarship, which was already more generous than I could imagine, to a full-ride.” Ivie explained that if he achieves his goals previously stated, his scholarship would increase to cover all his schooling. “I have talked to Coach Kyle [Grossarth, BYU Men’s Sprint Coach], and he said that I can increase my scholarship in college.”

While Ivie knows where he will be attending school next fall, there are many athletes that might have had their last opportunity to show colleges what they can offer stripped from them. “I feel terrible for them,” commented Ivie. “If I was in that situation, I would feel worse than I do already.” Ivie was quick to continue, showing the mindset of a true champion. “In my opinion, [COVID-19] is a setback. I have had my setbacks as well. I have had surgeries and injuries that have set me back months. It’s how you look at it. If you say, ‘this is going to stop me’, it will. Or you can keep working.”

Ivie concluded his self-reflection, “I wish I would have not taken school and athletics for granted. Now that I don’t have those any more, the track meets and schooling, the social aspect, I took it for granted. I will look back and be more grateful.”

Ivie’s message is that “setbacks” are a part of life. While individuals have no control over how and when they occur, there are two things every athlete is taught: you can only control your attitude and effort. While there are many unknowns in the future, we should all take a page out of Ivie’s book and continue to press forward with optimism while showing gratitude for what we have. 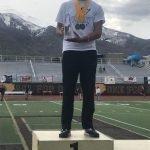 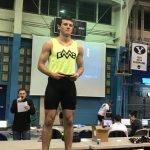 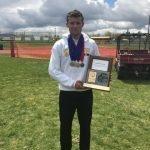