Around 1:30 p.m. Tuesday, a black Hyundai SUV was traveling westbound on I-70 in Emery County, approximately ten miles west of Green River.

According to Utah Highway Patrol, the vehicle went off the left side of the highway near mile-marker 150. The vehicle then went back onto the interstate where it rolled approximately four times before coming to a rest on its top.

In the SUV was an adult female driver, an adult male passenger and two small children, all from Colorado. The adult male passenger was killed during the crash while the other three occupants were transported to St. Mary’s Hospital in Grand Junction in stable condition. The names of those involved have not been released at this time.

UHP has stated that all of the occupants were properly restrained and impairment did not appear to be a factor.

More information will be posted to ETV 10 News once it becomes available. 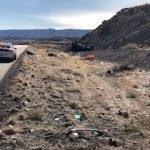 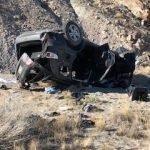 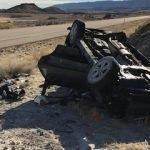