The first, second and third place finishers with Lion Club Members at the event. Not pictured: Jeff Hill

Fifth-grade students at Creekview Elementary worked their way around the constitution in a spelling bee-like competition ranging in information from various amendments to the vetoing of a law. The bee was held at the local elementary school on Tuesday.

Students were asked questions regarding the U.S. Constitution and received cash awards based on their finishing place. The bee, put on by the local Lions Club, is held in the local elementary schools throughout Carbon County and has been held for the past five years.

“One of the main goals,” explained member Leonard Miller, “is to teach the students about the constitution and the freedoms that we enjoy here in America.”

“It was something fun to learn about America,” said Dylan E., one of the finishers tied for third place.

“You want to win,” explained second place finisher Mattie P. “But it’s fun at the same time because you can learn about your state.”

Nathan E. took first place in the event with Mattie P. coming in at second place. Third place was split in a six-way tie between Jacob N., Ridge N., Garrett B., Dylan C., Gabe I., and Lizzy B.

Students expressed the fun had while preparing and participating and also expounded on the value of the competition. 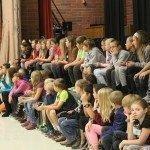 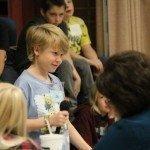 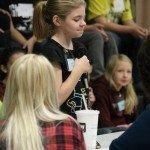 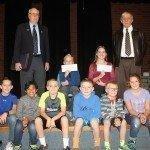 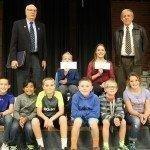