Sponsored by the Price Chapter of the Lion’s Club International, the bee quizzes students on their knowledge of things pertaining to the United States Constitution. This particular bee began with the students singing their school song.

After the first round of competition, the number of students on stage dwindled to 24. The second round boasted 19 competitors left. By the third round, only one student left the stage with an incorrect answer.

Questions such as “How many amendments to the constitution are there?” and “In which amendment are Americans guaranteed a speedy and public trial by an impartial jury?” were given to the students, who met the challenge of answering nearly every time.

The judges decided to make the questions a little tougher and brought in the bonus round questions. Once this commenced, the students found it to be more of a challenge. This round brought the number of competitors from 14 to three.

The remaining 11 were then put through rounds to find the fourth and fifth place students. The three that won the previous round were then asked questions and sorted accordingly into first, second and third places.

The first place winner, Jack Hedin, received $60. Second place went to Mavisen King, who was awarded $40. Morgan Luke won third place and was awarded $20. The fourth and fifth place finishers were a tie between Dylan Stanley, Jack Banasky and Derek Stead, who were all awarded $15. 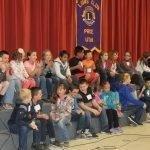 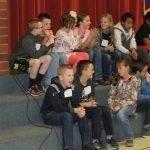 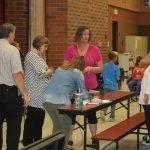 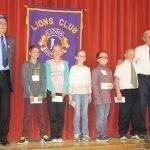