When Creekview Elementary Principal John Thomas came to the school nine years ago, he had been teaching for many years. But, having just achieved his education for his administrative certificate, he wasn’t sure what to expect. However, he says his time at the school has been fun and fulfilling.

While Thomas is retiring from Carbon School District this year, he has no intention of leaving education. He is currently looking of a position in Nevada or possibly Wyoming to continue teaching for at least a few years. A native of Stockton, Utah, Thomas spent all of his teaching career working in Tooele School District after graduating from Snow College and Utah State University.

He later went on to get a Masters degree from Grand Canyon University and finally his administrative certificate from the Western Governors University. That is when he came to Carbon. When asked about what he was most proud of in his years of working at Creekview, he said it had to be the STEM (Science Technology Engineering and Math) Gold School designation the school achieve a couple of years ago.

“STEM has been good for our school,” he said. “Using STEM ties to all the other things that go on in school because it gets kids excited about what goes on here.”

This year, the STEM program has been tied to all types of events, including a literacy night the school held as well as a math game night.

“On math game night, the crowds to get in the multipurpose room looked like those at Disneyland, we had so many people come,” he said.

Early this year, the STEM houses (Science, Technology, Engineering and Math) at Creekview Elementary were given the challenge of finding a way to warn pilots flying into the Carbon County Airport if there was a problem with the runways at the facility. At the beginning of the year, the school was divided between the four STEM houses so that students from all grades were represented in each unit and they have been competing with each other this school year on various aspects.

In April, each house presented their solutions to the airport problem. Four projects were displayed on the stage at the school with the group of students who came up with them explaining to the student body and to a panel of judges what their projects did. The unique solutions ranged from having different colored lights at the airport for various hazards to having a large stop sign to warn pilots not to land. Each group went over in great detail how their project would work and then demonstrated the solution for all to see.

It was a big beginning for a week in which students from the school also displayed much of the technology they use and projects throughout the STEM initiative on the schools engineering night.

Just before spring break, students cheered as administrators, teachers and staff from around Carbon School District came to Creekview Elementary to participate in Math Hoops Live. The day was broken up into two different assemblies: one in the morning for the younger grades and one in the afternoon for the fourth and fifth grades. Students would shake dice for their STEM house (they were all divided into Science, Technology, Engineering and Math houses earlier in the year) and then they would work a math problem and the answer would denote where the next guest shooter would stand and shoot a for the basket to score points for their house team. The faster the students could work the problem, the more shots their team would have in an eight-minute period.

In the morning session the math house team won the four-team competition and in the afternoon, the engineering team won the honors. The exercise was a combination of luck, mathematical skill and, of course, raw shooting talent exhibited by the guest shooters themselves.

In early March, Richard Shaw came to the school and gave an assembly on dog sledding and how dog teams work together. He highlighted the equipment that mushers use and talked about the dogs and how much they like pulling sleds. He brought an actual dog sled for the students to look at and gave a slideshow about the experience itself.

With Thomas retiring, next year the new principal at the school will be Keith Palmer, who presently teaches at Mont Harmon Middle School. A popular teacher with students there, it is sure that the school will have an active learning schedule and continued engagement with the local community.

“I look forward to the change,” said Thomas. “But I will miss the students and staff at Creekview.” 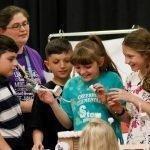 One student group shows off their solution to the problem of communication about landing strip problems between the Price Airport and pilots trying to land there. 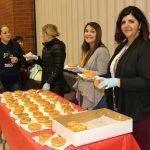 PTA members stand at a table ready to serve kids and dads donuts on Dads and Donuts day at Creekview Elementary. 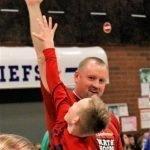 Carbon Superintendent Lance Hatch holds his hand up as kids try to “high five” him just before the Math Hoops competition began. 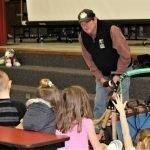 Richard Shaw leans over to listen as students ask questions about the sport of Dog Sledding during his presentation to students.