Price – The Division of Wildlife Resources, in partnership with the Mule Deer Foundation and Sportsmen for Fish & Wildlife, are transplanting as many as 100 deer from Bountiful to the mountains in southeastern Utah.

The deer that are being moved have taken up permanent residence in town, where they’ve damaged fruit trees and landscaping. They’ve also become a traffic hazard.

As many as 25 deer-sized “clover traps” are baited to catch the deer without inflicting any harm or injury to the animals. Sportsmen monitor the traps and then, with the help of DWR biologists, move trapped deer into horse trailers for their trip to the southeast side of the Manti-La Sal National Forest. The areas where the deer are being released have enough forage to support the newcomers until plants in the areas green-up in the spring.

“Deer herds on the southeast portion of the Manti deer unit have struggled from years of drought,” said Brent Stettler, DWR conservation outreach manager in southeastern Utah. “We’re hoping bringing deer in from Davis County will help these populations rebound.”

The photos included in this story were captured on Jan. 23 at Joe’s Valley. Two bucks and nine does were released on this occasion. 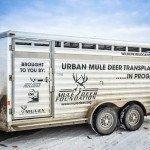 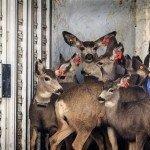