Members and guests of the Emery County Historical Society listened intently as Edward Geary presented the history of the Des-Bee-Dove Mine at their monthly meeting on Thursday evening.

Geary began his presentation speaking about the complete reclamation of the mine that was recently completed. He reported that this task began in 2003 and continued for several years. However, PacifiCorp sealed up the portals and the outside structures were demolished in 1987. Geary explained that over 100,000 tons of “bug dust” had to be hauled away and steep slopes and rocky ledges made it treacherous for the equipment operators. It has now been reclaimed, meaning that just by looking at the canyon, no one would ever know a mine had been there.

Geary distributed a timeline to the audience and then began to tell the story of the mine. In August of 1938, on the recommendation of Church of Jesus Christ and Latter-day Saint Stake President J. Frank Killian, the church purchased 400 acres of coal land. In November, the first shipment of coal was delivered to the Provo region.

The mine became a welfare project for the church and was done by volunteers. Over 27,000 tons of coal was produced by hand labor. This mine was named Desert Mine and Shirl McArthur was called to serve as mine superintendent. Water was piped from Burnt Tree Spring on East Mountain and power was completed to the mine in 1948. In 1955, Desert #2 Mine was opened and was renamed to the Beehive Mine because of regulatory situations of small mines.

In 1964, production reached 100,000 tons of coal annually. In 1972, the mine property was sold to Utah Power and Light and operated by American Coal Company. Then, in 1977, the Little Dove Mine was opened. In 1979, American Coal was compelled to sell the operating contract to Emery Mining Corporation. The three mines became one, called Des-Bee-Dove, and ultimately closed in 1987.

Following Geary’s presentation, many of the guests who had worked in the mine spoke about their experiences there. Many had good memories and spoke of favorable mine circumstances.

It was also reported that the Historical Preservation Committee has prepared three panels with pictures and information of the mine to be placed in a kiosk on the Des-Bee-Dove Mine Road. 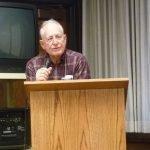 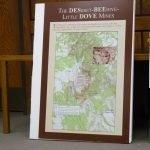 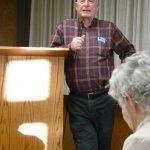