The Diamond Divas 10U Softball started their season with 3rd place wins at the Heat Friendly, Red Rock Classic, May Madness, and at the local event, the Sagebrush Shootout. Despite pitcher, Haven Byerly, throwing a no hitter and a perfect game at the Sagebrush Shootout, the Divas just could not get their bats going to push them into the championship games…until the Copper Classic.

The Divas battled blazing heat Friday and Saturday in Taylorsville, UT, going up against some of the state’s top ranked teams. A hard loss early on in pool play against the Grantsville Craze had the team a little shaken to start the tournament. The girls rallied back, winning their next pool play game with another no hitter by Byerly. The bats finally began to come alive as the team faced off against Idaho Ice and SL Pegasus-Smith in bracket play. Jenna Richards started the rally with a triple to right field, boosting the team’s spirits. Gabby Vasquez followed up with a huge 3 run home run, to keep the Divas fired up throughout the day.

Saturday morning, the Divas faced off once again with the Grantsville Craze. Outstanding pitching by Byerly, and catching by Lexi Morlan, kept the Craze off the bases the majority of the contest. Despite some hard hits by Reese Ardohain and Kylan Sorenson, the Craze defense was solid, keeping the score at 0-0 all the way into the fourth inning. The Divas gained some momentum with a shot to left field by Sorenson and a walk by Richards, putting two runners in scoring position. With two outs and two runners on, Andee Ferderber hit a hard line drive, 2 RBI single, to right field, giving the Divas the lead. In the bottom of the fourth, the Craze rallied back, loading the bases with no outs. With the pressure on, the next Craze batter popped up an infield fly to Richards, with no runners advancing. Byerly struck out the next batter swinging. With two outs and bases loaded, the number seven Craze batter hit a hard fly ball down the right field line in foul territory. Sorenson made a diving attempt, as the ball tipped off her mitt for a foul ball. With two strikes, two outs and bases loaded, Byerly was able to fool the Craze batter as she watched a 3rd strike change up go by for the final out of the contest.

The Divas continued their run in the bracket play to eventually face off against the undefeated, Utah ASA number one ranked team, the SL Pegasus-Newell, in the championship game. Despite some hard hits by Brielle Sandoval, Ardohain, and Sorenson, the Divas just could not put any runners in, leaving girls in scoring position, 3 out of 5 innings. Great defensive plays by Ambree Jones, Adri Abeyta, Ardohain, Ferderber, Morlan, Sandoval, and Vasquez, kept the Pegasus scoreless in two out of 5 innings.  Ultimately the Pegasus hitting came through as they began to hit gaps in the Divas defense, allowing 5 runs to score for a loss of 5-0 to the Pegasus. Though the Divas came away with a second place finish, they were proud to have fought so hard in the scorching sun, against such an elite ranked team for the championship. 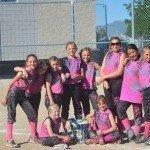