The Diamond Divas competed in the Courtney Osborn Memorial Tournament in Payson on Sept. 11- 12. The girls fought hard the entire weekend, coming out with a second place finish with four wins and one loss on the weekend.

Kylan Sorenson started the weekend off strong, pitching for the Divas in their first game with a 12-3 victory. Defensive plays by Gabby Vasquez and Ambree Jones helped to push the Diamond Divas past the competition while strong bats allowed the team to outscore their competition by a combined total margin of 25 runs over the two-day tournament. Four players, Mollie Horsley, Vasquez, Jones and Haven Byerly, each knocked out home runs between the two days. In the last game of the tournament, with a tied score and two outs, Byerly stole home to score the winning run in the final game for the Diamond Divas, securing their second place finish.

On Sept. 18-19, the Diamond Divas traveled to Tooele to play in the Fall Challenge, going undefeated in bracket play up until the championship game. Byerly pitched well over the weekend with a no hitter and a combined total of 37 strike outs over five games, 11 of which came in the championship game. Solid defensive plays by Horsley, Reese Ardohain, Kylan Sorenson and Jenna Richards helped the Divas to overcome some tough competition. Strong at bats from Andee Ferderber, Jones and Madelyn Fawcett allowed the Divas to stay ahead of the competition for most of the tournament.

In the semi-final game leading up to the championship, Jenna Richards hit a triple, scoring the tying run, and then scoring herself on a passed ball error at third base to win the game for the Diamond Divas and move them on to the championship. The Divas were led by Byerly and Fawcett’s hitting in the final game, but it wasn’t enough as the Diamond Divas fell to Crossfire 4-1 on Saturday in the championship game. Byerly went 2-2 with hard hit singles while Fawcett had an RBI double, scoring the Divas only run. The team fought hard, but just couldn’t seal the deal, leaving runners in scoring position four out of the five innings. 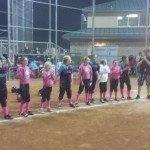 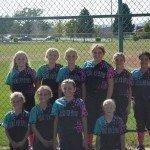 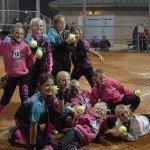