Nobody denies that last Friday’s 61-0 road loss was not a tough one to swallow for the Carbon High football team.  Morgan scored 35 points in the first quarter alone. It is one reason Morgan is ranked fourth in Region 3A right now. This Friday, the Dinos face top ranked Judge Memorial on the road again.

But the scrappy core of players who make up the Carbon team did not let that phase them as they hit the practice field this week. Heads held high, the team ran play after play as they worked hard to prepare for the coming game.

It is not to say the coaching staff does not see the need for change. Coach Jeff Blanc said they are making adjustments and looking for a combination that works. Dominic Rondinelli will take the helm as quarterback  Dallyn Mower will move to the two back position, Trace Johnson  will shift to the three back and Zac Hathaway will be at the four back spot. Blanc said they need to get the ball into Hathaway’s hands more and they are going to try to move him into the backfield to see if this help.

“No one has quit. They show up, work hard and are excited to be here,” Blanc said of his players. “We have nine injured players. Six are varsity starters and that hurts with our small squad. But we just need to win one or two and we head to the playoffs. We can get there.” 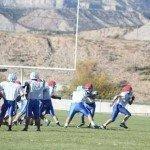 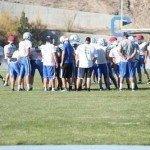 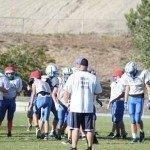