Region XII Golf began on Wednesday, Aug. 12 as both the Dinos and the Spartans had good showings in the season opener in Morgan.

Carbon took first with an impressive 324 score. Bode Salas led all golfers with a 69 round, eight strokes ahead of second place. Kyler Clark and Daron Garner each finished with 84 strokes while Branden Scovill rounded off the Dinos’ top four with a 87 score.

Richfield took second place with a 342 team score followed by Emery in third at 354. South Sevier, Grand and San Juan were in the bottom half of scoring with 358, 359 and 435, respectively.

Trevin Wakefield led the Spartans with 81 strokes. He was followed by Kavery Killpack, Tayven Guymon and Devan Guymon with respective scores of 87, 90 and 96. Full results of the matchup can be found below.

Up next, the region teams will meet in Richfield on Tuesday. 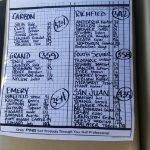