The Carbon Dinos suffered four tough losses by just 11 total runs on Friday and Saturday at the Pizza Hut Classic in St. George.

The Dinos began the Classic on Friday against the Dixie Flyers. In the 3-2 contest won by the Flyers, Jayden Flemmett and Triton Abeyta picked up the two RBIs in the game. Flemmett’s came in the first inning to drive home Mitch Olson, who was on base after leading the game off with a double. Abeyta’s single in the top of the sixth drove Cole Fossat in to round out the scoring. Fossat was also credited with the loss on the mound after giving up three runs, only one earned, on three hits in two innings of work. Austin Henry pitched the final five innings of the game.

In game two on Friday, Carbon squared off against Tooele. After both teams scored five runs each over the two first innings, the Dinos added four in the fourth to jump out to a 9-5 lead. Unfortunately, Carbon gave up eight runs in the fifth and sixth innings to lose the game 13-9. Fossat led the Dinos with three hits in four at bats, two doubles and a single, en route to three RBIs. Despite scoring nine runs, Carbon had just five hits in the game. The other two hits came off the bats of Cody Lowe, who hit a double, and Talon Abeyta. Olson scored a team-high three runs in the game. Chase Morgan, Anthony Maclean and Zac Bradley all made pitching appearances in the game, with Morgan taking the loss.

It was much of the same in game one on Saturday against Stansbury. After falling behind 12-3 after four innings of play, the Dinos responded with 10 runs over the final three innings to cut into the Stallion lead. Stansbury won the shootout 18-13. Fossat again powered the Dinos with three hits and three RBIs. Lowe added two hits and two RBIs and Flemmett nailed the first Carbon home run of the season, a solo blast. Talon Abeyta added a double as well. Coach Jeff Cisneros used six pitchers in the game with Nate Olson taking the loss.

Against Box Elder in the final game of the weekend, the Dinos gave up a run in the bottom of the eighth to lose the game 9-8. Carbon scored four in the seventh to take the one-run lead before Box Elder added one of their own in the bottom of the inning to send the game into extra innings. Lowe exploded in the game with four hits in five at bats, nailing two triples and one double. He drove in two runs in the game. Olson and Talon Abeyta each drove in two more apiece, combining for four hits. Morgan had the only other hit for Carbon, a double.

Carbon (0-5, 0-0 Region 12) will host two games this week, a Wednesday tilt against Union and Friday against Emery. Both games will begin at 3 p.m. at Ernie Gardner Field in Helper. 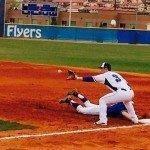 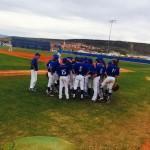 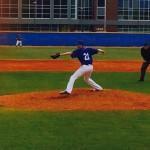 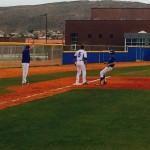