A 12-0 run spanning the first and second quarters spurred the Carbon Dinos to their second straight home win on Friday night against visiting Tooele, 53-48. The Dinos led by as many as 16 in the game when they took a 26-10 lead on back-to-back buckets from Cole Fossat with a little over six minutes to play in the opening half.

Five different Dinos scored in the first quarter with Garrett Blanc and Mitch Olsen each scoring five points apiece. The Dinos led after one, 19-10. Fossat scored seven points in the second quarter to help Carbon take a 30-17 lead into halftime. Fossat finished the game with 12 points.

Tooele was able to chip away at the lead in the third and got within six, 32-26, before Gage Daugherty nailed back-to-back three pointers to extend Carbon’s lead. Daugherty led the Dinos in scoring with 13, including three three-pointers. 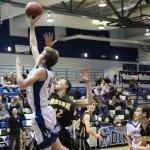