Rhonda Peterson has served as the director of events at the Carbon County Fairgrounds and Event Center for many years and has recently made the decision to retire.

At the Carbon County Commission meeting that took place on Tuesday afternoon, Peterson was honored by the commissioners for her hard work and dedication.

Peterson spoke at the meeting, thanking the community for the support that she has been given over the years. Commissioner Jae Potter then presented her with a plaque and shook her hand, stating that it is going to be difficult to find someone to replace her. He also congratulated her on her retirement and thanked her for her years of work.

Commissioner Potter also joked that Peterson had neglected to say who her favorite commissioner happened to be, to which Peterson promptly responded that it was indeed Potter. 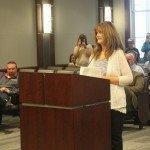