The Helper City Council was visited by Tim Glenn during its Thursday evening meeting. Glenn, a resident of Green River, is a candidate for State Representative for District 69. He stated that he is currently traveling to different communities to introduce himself and inform that if he is elected, he is very interested and willing to work with local communities.

One of the biggest issues that pushed Glenn into the ring was the Transient Road Taxes (TRT). Currently, the state requires that the taxes be used toward marketing and infrastructure. However, according to Glenn, two thirds of the taxes go toward marketing while only one third goes to infrastructure. To Glenn, if areas are going to rely more on tourism in the coming years, the current workings of the taxes do not benefit residents or tourists greatly.

Glenn informed the council that last year, Grand County had $5,000,000 in TRT and had to spend 3.5 million on marketing. He feels as if the law assumes that tourists do not impact a space that they inhabit and that areas can handle a great influx without improving infrastructure.

The change that Glenn would make regarding TRT is giving rural counties the choice on how much would go toward marketing and infrastructure, respexctively. Also important to Glenn is public lands. He believes that they are a protection for the middle class and wants to ensure that representatives are accountable for them.

“I appreciate the opportunity to come and introduce myself,” Glenn concluded. 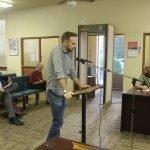 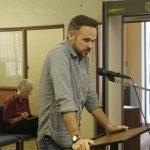