The worth of fire drills in schools has proven itself to be valuable over the years.

Now other kinds of drills have also been put in place, including lock down drills that could prevent many people from getting hurt by unauthorized persons either in a school building or near a campus.

On Thursday afternoon just such a drill, with full participation by administration, staff, students and law enforcement agencies revealed that the preparation that the school and authorities have been making is timely and effective.

The event began by reports from the school’s front office that an unauthorized person had compromised the security of the building. In actuality the person inside was a plant created by law enforcement to make the drill as real as possible.

A lock down announcement came over the public address system and teachers, knowing that a emergency exercise was coming at some point, announced to classes that the event was a drill, but they worked with students to secure their rooms and those in them as if it was a real situation.

Law enforcement agencies, including the Price Police Department, the Carbon County Sheriff’s Office, the Utah Highway Patrol and the Helper Police Department were ready to respond when the call came. They immediately came to the school in multiple units, while other officers blocked off Woodhill Road to keep traffic out of the area, and some put a perimeter around the building.

The peace officers went room to room to secure the school, once having maintained that the person of interest was not there and then escorted each classroom of students and their teacher out of the building. The students in their classroom groups came through the schools west parking lot and were stopped by Assistant Principal Karen Bedont before crossing Woodhill Road for a head count for each classroom. They then crossed the road and proceeded to the grassy field east of the Carbon School District office where they assembled for further instructions.

Meanwhile officers in the building did finally find their man and arrested him. Some students that were leaving the building were a little shocked when they saw the plant actually laying on the floor while they were handcuffing him. He put a wrinkle into the event by saying to officers “Did you get my friend?” They then began searching to see if there was as second person involved, but no one was found, although one of the custodians was questioned when he exited the cafeteria and turned around and officers were standing there.

The drill proved to be a huge success by not only showing the preparations the school had made for dealing just such a situation worked, but also in the fact a few little things didn’t go as well as they could have.

One of things that happened that showed the drill training had worked with students took place when two female students who were in a restroom when the announcement was made stayed in place and locked themselves in stalls until the police cleared the area. In another case a teacher who was on preparation time was in a back room doing some work and she also stayed in place and hid away. All other personnel at the school were accounted for as soon as a final count was made.

The plant perpetrator had actually acted like an intruder, trying to get into areas he shouldn’t by trying to open doors and pushing his access into other areas. In a later debriefing he said he hadn’t found anything open and it seemed classrooms apparently deserted and all areas were secured.

Some of the officers involved in the exercise made some suggestions at a debriefing that took place later that afternoon. Those suggestions included things to improve the process such as having a way to show that rooms have been cleared so that other officials know that everyone in them has evacuated and that there should be a command center set up to keep everyone informed about what is going on during the process.

There was also some questions about protocols about various things that came up. Some new things had popped up during the drill and those situations will now be studied and solutions will be implemented to bring about some changes.

“This is the first in a series of drills we will be doing in schools to help us in case something like this really happens,” said Carbon School District Superintendent Steve Carlsen. “We will eventually be doing this at other schools as well.” 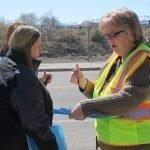 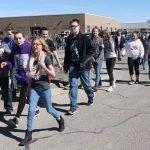 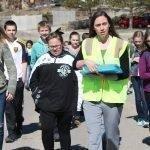 Students walk Britni King toward the assembly area after being evacuated