The duck, goose and swan hunt began Oct. 4 and Canada goose numbers are the second highest in 10 years.

Wetlands outside of the Wildlife Management Areas (WMA) and the refuge are much drier. Dry conditions on these seasonal marshes will force hunters into a smaller area. It will also reduce the places waterfowl can go to escape hunting pressure on the WMAs and the refuge.

To learn more about water conditions at the state WMAs, hunting tips and more, visit the DWR website at https://wildlife.utah.gov/. 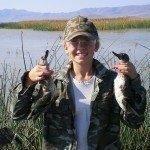 Ginny Wood shows off the ducks she took during the youth only waterfowl hunt this year. Photo courtesy of DWR.