Helper Mayor Lenise Peterman explained that this appreciation was an acknowledgment of the jobs that they have enacted over the past few years. She explained that as seasonal employees, they have overseen many areas of the city, mainly focusing on the parks and cemeteries.

The city has received many compliments on their work and the city wished to present them with a token of thanks for improving the city, not only for the citizens, but for visitors as well.

“I have had more people tell me at Memorial Day that that’s the best it has ever looked,” stated Mayor Peterman in regard to the cemetery.

Councilman and former Helper City Public Works Director Gary Harwood stated that he has had the pleasure of working with the two men for five or six years and it has been enjoyable. He credited them as hard working, the type that go out and make sure that the job is done.

Councilwoman Michelle Goldsmith also spoke praise on Gallegos and Cazares, saying that they are always cheerful, in a good mood, polite and concerned that the city looks its best. It was said that they always attempt to be inviting to the public and welcome visitors to the community.

Mayor Peterman concluded by saying that what Cazares and Gallegos do is appreciated and shows with all of the compliments that they have received. 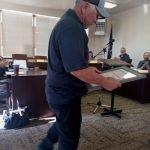 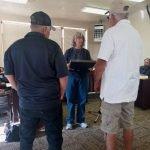 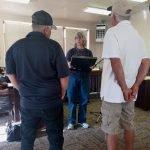