Kourtney Herrera, RN,  Southeastern Utah Health Department is seeing an alarming trend in Price and the surrounding communities. The increased use of e-cigarettes, or e-cigs as they are called, around the area is causing confusion and problems as businesses struggle to understand the laws about the use of the so called “Smokeless” devices.

According to Herrera, e-cigs contain the same amount of nicotine and chemicals as a regular cigarette. The only difference is that they expel a vapor instead of second hand smoke. The only people they are safer for is those who might be exposed to the second hand smoke, smokers themselves are not getting any health benefit from the switch to an e-cig.

She says that despite this, some physicians in the community are prescribing the e-cigs as a tool for smoking cessation. Herrera states that this is a dangerous practice. Also many people assume that since the e-cigs do not put out smoke, they can smoke anywhere.

This belief is also false and the Utah Clean Air Act bans the use of e-cigs in public places and work spaces. Herrera says she is getting calls from businesses and the public on an increasing rate. If a business allows the use of an e-cig within 25 feet of the entrance, they will face a stiff fine. A second complaint could result in the loss of their business license.

Herrera also reminds the public that smoke free zones also apply to other tobacco products such as chewing tobacco. She is working to get the wording on signs in the area to reflect the  inclusion of chew, e-cigs and all tobacco products.

Southeastern Utah Health Department offers smoking cessation classes to assist those wanting to quit. For adults 19 and older there is a Freedom From Smoking Class that is available free of charge. The class runs 8 weeks and there is one ready to begin August 26. They will be accepting registrations until August 23.

END (End Nicotine Dependence) is for those 18 and younger who are currently using tobacco products, This class runs for eight weeks, one day a week after school at the Health Department. The END class will start on September 6 and there is still room for those wanting to participate.

The Utah Quit Line may be able to help with NRT’s (nicotine replacement therapy). They are funded each year and can help if they have the funding in place. NRT’s include patches and nicotine gum.

To sign up for classes or for more information about e-cigs or tobacco cessation help call Southeastern Utah Health Department at 435 637-3671 and ask for Kourtney Herrera or Debbie Marvadakis. 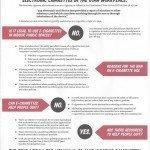