The American Legion, along with a local scout and his troop, have teamed up to provide a service to the community. It all began several weeks ago when David Jelin, American Legion Price Post 3 Commander, attended the Price City Council meeting and discussed the need for a flag retirement box.

From there, Jelin was introduced to Troop 271 where Michael Wilson was seeking an Eagle Scout project. Wilson jumped at the idea to refurbish a box found by Price City Mayor Mike Kourianos.

“We did quite a bit of work,” stated Wilson. “We put the rebar trim on, put the handles on and primed it so it would be ready to paint.”

Then, a Helper artist, Evelynn Fiek, came over and drew some stretches. After a couple of adjustments, she spent the next two weeks beautifying the box. Once it was finished, Wilson and his scout troop painted a clear coat on top of the artwork to preserve the paintings and give it a glossy finish. The troop then delivered it to city hall.

“We want to make sure the community knows, so they can bring all their flags in,” concluded Wilson. Mayor Kourianos added, “The box provides a place for the community to safely discard old and used flags.”

The box is located just inside the east doors of Price City Hall. The community is invited to drop off worn flags in the box for the American Legion to dispose of properly. 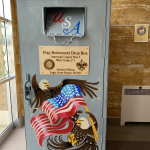 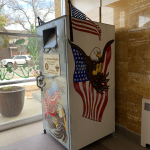 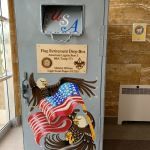 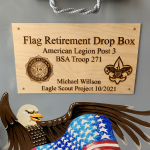