This presentation pertained to Braley’s upcoming Eagle Scout project. He chose to focus on the Wellington Pond for his project, wishing to draw attention and assist with the beautification of the area. His initial idea was to install a pamphlet kiosk near the pond with information on the pond and other recreational experiences in the area.

While Bradley did present this as an option to the council, he had another idea in mind that had just come to light the evening before.

Connor’s father, Wellington City Police Chief Rory Bradley, had visited the pond and noticed a woman that frequented the area. This woman had a plastic bag that was filled with various items of garbage, prompting Rory to ask her why. This woman informed him that while there is a dumpster nearby, there are no garbage receptacles in the pond area and those that fish there frequently throw their trash around. This woman takes the time to gather trash each time she visits.

With this experience in mind, the Bradley family then discussed the idea of installing portable garbage can holders in the pond. These would be in the form of wooden constructed enclosures that the cans would then be able to be placed in.

The council questioned the retrieval of the garbage, to which Rory stated that he believed he could assign the task or take it on himself during his daily duties.

“I really think it would help keep the pond free of garbage,” Rory stated.

The council debated for some time, stating that they believed that both projects were great ideas. Councilman Rich commended Connor on his work in the Eagle Scouts and councilwoman Bethany Perea stated that, while she loved the kiosk idea to get the word out, she believed that it would take away from it if the pond was filled with garbage when visited.

Votes were taken through the council and the ultimate decision was to approve Connor in moving forward with the garbage enclosure project. This project was then signed off by Wellington Mayor Joan Powell. 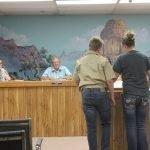 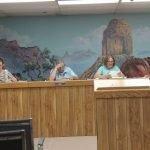 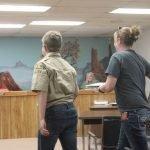