Chase Hanson, an Eagle Scout candidate, planned and carried out a proper flag retirement ceremony for his Eagle Project. On Monday evening at the Huntington arena, friends and family met to participate in the ceremony.

Hanson requested that his father Kim act as the master of ceremonies. Kim introduced Mac Mills to give a special recognition to Dana and Wes Gray. Dana has given over 40 years of service to the scouting program. She was presented with an eagle quilt made by Beulah Oveson for her many years of service.

Troops 394, 903 and 385 then presented the colors of the United States of America in a special flag ceremony. Next, Trevor Cowley addressed the crowd. Cowley is an Afghanistan veteran who received the French Cross while serving. He was one of the first non-French soliders to receive this award for his support of a French outpost. He began by thanking the Grays for their assistance in his scouting projects, including his Eagle. He also thanked Wes for his service as a medic in the military. Cowley remarked that scouting taught him self-reliance, which was helpful to him in basic training.

Cowley then asked the audience to think about the significance of the American flag and what it meant to them personally. He said the flag stands for unity as a nation with liberty and justice for all.

Following Cowley’s remarks, the Huntington Glee Club sang the “Military Medley” and “God Bless America.” Then, the scouts’ Color Guard led the audience in the Pledge of Allegiance to 20 American flags one last time before the flags were retired properly by burning them. These flags were tattered and torn from service at various locations in the community. 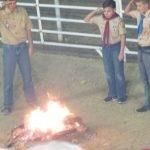 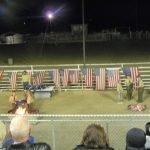 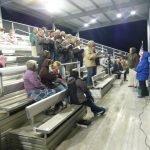 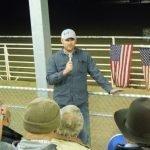 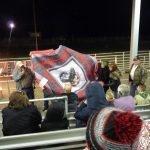 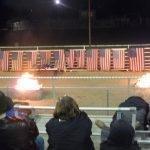