The East Carbon City Hall was packed to an overflowing capacity on Tuesday evening as the community gathered together for a rallying cry to urge the council members for assistance with current problems in the area.

Citizen Ron LaBorde spoke to the council first, thanking them for giving him the time and jumping right in by stating that East Carbon has a crime problem. In the town in the last year, LaBorde has been made known of people’s belongings being stolen, buildings and homes being burglarized, and an upsurge in drug-related issues, such as locating needles throughout the town.

LaBorde continued by informing the council that citizen’s pets have been falling ill with antifreeze being found in their stomachs after they were pumped. While he did state that it was conjecture, those involved believe that dogs are being poisoned by those that are roaming the streets to harvest belongings to possibly fund their drug habits.

LaBorde believes that someone is dropping the ball somewhere along the lines and has been informed that the local jail is overcrowded, which is one of the reasons that criminals are released back into the community.

“I think our kids deserve better than this,” LaBorde stated. He concluded by urging the council that being lenient and turning a blind eye is not going to assist those committing the crimes.

Gabe Hunt, another local, also spoke to the council and began by stating that his reason for being on the agenda was twofold. First, he said he wished to ask the council and mayor if they have any recommendations or ideas to get the drug problem under control. Secondly, he wished to reach the locals listening and ask them to become engaged in legal ways to combat against those that are worsening the drug epidemic in the city.

In February, East Carbon law enforcement officers invited citizens to discuss the drug and theft problem. There, they learned that the officer’s hands are tied unless the offenders are caught in plain sight or there is an absence of probable cause.

Hunt suggested ideas such as renters securing business licenses and ensuring that houses are up to snuff. He also suggested that the council pays for intensive drug training for the officers and urged the community not to tear one another apart on social media. He concluded by asking the citizens to put differences aside to work for the common goal, which is to clean up the city.

Finally, Chief Sam Leonard was requested to address these issues. He acknowledged that the finding of needles in the area is a big issue, stating that the officers rarely find cases with marijuana anymore. He then discussed those that are out at all hours of the night, informing the crowd that it is not against the law.

Chief Leonard continued by stating that he and everyone in the department respects everybody’s rights and also informed all that the crime stats are actually down.

In the summer, according to Chief Leonard, crime doubles and triples everywhere. He then stated that all the drug crime turns out to be tied together in Carbon and Emery counties and encouraged those listening to call Drug Task Force when they are witness to drug abuse or drug dealing. Carbon County Attorney Jeremy Humes also spoke, stating that there are a lot more factors at play than this council could ever address and suggested that those concerned speak with legislators.

Mayor David Avery informed all that he would do everything that the law would allow him. A common theme among all officials that spoke during the meeting was to urge the residents to always call authorities when they are witness to a crime. 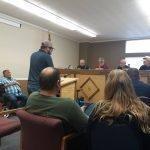 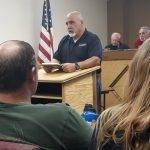