The members of the E. Clampus Vitus, Matt Warner Chapter, unveiled their newest plaque dedication on Saturday, Sept. 17. This dedication was to the Columbia Coal Mine, Carbon County Railway and Gevena Mine in Horse Canyon. The Clampers were joined by Nobel Grand Humbug James Forsythe for this dedication.

The Geneva Coal Mine, located in Horse Canyon, began in 1942 when the Defense Plant Corporation constructed a six-mile spur from the Columbia mine to that new mine. It was stated that the new mine was developed for the sole purpose of furnishing coking coal to the new Geneva Steel mill in Vineyard, Utah.

There is a Geneva/Horse Canyon Mine Monument that is located behind the Helper Museum to the west of 1st West. There were at least 25 miners that lost their lives, documented, in the Horse Canyon Mine.

The town of Columbia, which is located about 11 miles northeast of where the plaque dedication now sits near East Carbon, was the next focus. The Clampers explained that it was a town built by the Columbia Steel Company, which is a subsidiary of the United States Steel Corporation. The mine produced coking coal to fire the company’s by-product plant and blast furnaces located in Ironton, Utah.

Construction on this camp began in 1922 and, one year later, Thomas C. Harvey took charge as the superintendent of operations. Through this efforts, the mine gradually improved. The first school in Columbia took place in a large tent and had a total of 49 students. In 1925, a six-room school was erected.

Columbia was one of three towns in the eastern part of Carbon County. Prior to 1973, the three towns were all company owned. On July 23 of 1973, the towns of Columbia and Dragerton merged to form East Carbon City.

In regard to the railway, it was stated that the first Carbon County Railway was organized in 1899 by the Rio Grande Western Railroad to serve mines in Clear Creek and Sunnyside. It was dissolved with the reorganization of the Gould properties in July 1908. These lines became the Denver & Rio Grande Western’s Clear Creek branch and the Sunnyside branch.

Further information on all three of these topics, the two mines and the railway, can be found on the plaques. 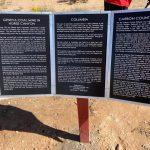 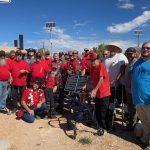 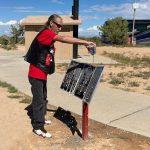