The College of Southern Nevada visited Price over the weekend and took three games out of four from the Utah State University Eastern baseball team. It very well could have been a clean sweep.

In game one on Thursday, the Coyotes scored four big runs in the fifth and two runs in each of the second, fourth and seventh innings to run away with the 10-1 win. Bennett Bradford and Luc Christensen had the only hits in the game, both singles.

An unearned run was the difference in game two between the two teams on Friday as the Coyotes kept the Golden Eagles hitless in the game. Sean Hardman scored the winning run on an error by CSN’s Cain Brady trying to throw out Bryce Blackburn at first. It is very rare to get a win despite the opposing team throwing a no-hitter. Eastern’s Jayce Hill threw a gem on the mound, scattering five hits and no runs in seven innings.

In the second game of the doubleheader on Friday, the Coyotes scored a late-inning run on a wild pitch to escape with the 3-2 win. After CSN took a 2-0 lead in the top of the second inning, the Golden Eagles tied it up in the bottom of the same frame on RBI’s by Hardman and Greg Ashley. Both came on fielder’s choices. Bradford picked up the loss on the mound after giving up three runs in 5.1 innings pitched.

A big fifth inning by Eastern in the fourth and final matchup spurred the Golden Eagles to a 6-4 lead, but the Coyotes responded in the top of the eighth with five runs to nab the win, 9-6. Eastern scored two in the fourth on a double by Shaun Petersen, which scored Cooper Black. Price native and former Carbon Dino Blackburn then singled, bringing in Hadley Thorpe. Greg Money and Black both singled in the fifth and Peters again doubled to notch a four-run inning. Hardman went five innings and gave up four runs, with just one of those earned. He walked six and struck out four. Skyler Thorpe came on in relief and gave up two earned runs to take the loss.

The Golden Eagles (11-34) will travel to Twin Falls this weekend to take on the College of Southern Idaho Golden Eagles (24-15, 13-11 SWAC), with doubleheaders beginning at 1 p.m. Friday and at noon on Saturday. 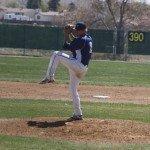 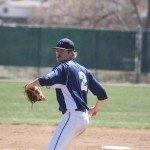