The trio explained their plans for companion activities for the Castle Valley Pageant. This will be called Summer Sidewalk Jamboree Eat-Shop-Play. With the visitors that come to the area at this time and the fair having been moved earlier this year, they have hopes of increasing activities, vendors and business opportunities the weekend of August 5-6.

Their plans also include a 5K race sponsored by the Emery High cheerleaders, breakfast by the Emery High drill team and a lamb fry sponsored by the Spartan soccer team. With at least 600 businesses in Emery County, many of which are home based, the Chamber’s goal is to bolster business. The majority of these activities will be based at and around the recreation center/pavilion. Castle Dale City was anxious to support the chamber in their endeavors.

The council also opened a public hearing on its proposed budget for the 2016-2017 budgets. There were no comments so the hearing was closed and the city council adopted the budgets. It also considered the Emery County tax rate, which remains the same as last year. The council was adjourned until July 7. 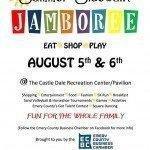 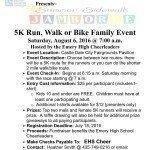