00The Carbon County Commissioners enjoyed their first meeting in the new building Wednesday about which Commissioner Potter called the “Maiden Voyage”. The Commissioners and assembly discussed several items in the meeting.

About the agreement, Commissioner Casey Hopes expressed concern about efficient response to calls. Hopes used the example of city emergency services sending a fire truck, with low fuel efficiency, to a medical call, when a smaller vehicle would suffice. The Mayor’s responding to this discussion seemed to agree that efficient operation is in everyone’s best interest.

Mayor Joe Piccolo complimented the commission on their intent to create cooperation between the cities and the county, but he warned that things should be done in the right order before anything should be funded, speaking of contracts and citing his experience with insurance. “Let’s take this a small bit at a time and solve the problem completely,” he said. The commission passed a motion to fund cooperative emergency services pending agreements between the cities.

The Commission’s next item was a proposal to renew the book mobile contract for the year. At $95,000 for the year, the proposed funding amount for the book mobile is $3,000 less than last year. “The mobile is well used, at least in my neighborhood” said Deputy County Attorney Christian Bryner “it provides a safe way for kids to get books in their neighborhood rather than riding their bikes on the side of the road…and I can get books that I need through their Interlibrary Loan program.” The proposed funding amount was approved.

Jason Llewelyn Director of Emergency Management and Homeland Security addressed the Commission about several grants for the County. The first grant discussed was a COPS grant. The grant would provide funding for two more individuals that would be tasked with monitoring felons of violent crimes and drug offenses.

Llewelyn next discussed a grant for body cameras. Since police officers nationally have been under increased scrutiny of late, the Department of Justice has been encouraging the use of body cameras for officers. Llewelyn explained that the cameras “eliminate the ‘he said she said’ issue.” The cameras also keep some officers on their toes since monitoring goes both ways. The grant is a 50/50 match grant and Llewelyn said that they would use the $21,000 for 17 body cameras. The major requirement that the Sheriff’s office had to do to qualify for the grant was to create policy addressing civil rights issues associated with body cameras.

The commission next discussed a federal grant for the airport. The Federal Aviation Administration has offered a two-year $150,000 grant for the development of the county airport. It was stated that if the county still wants the grant, the time to create a master plan for the airport has come. There were two proposals from companies to create the master plan; Javiation was selected.

Kathy D’Ambrosio presented the next item, concerning a request for funding a rodeo event for the National Barrel Horse Association. D’Ambrosio had previously requested “whatever assistance you can give us” (speaking to the commission). The commission approved waiving the fees for the fairgrounds as well as providing $1000 to be spent on advertising outside of Carbon County. Ambulance services for the Rodeo were also discussed. The goal behind the funding is to bring more business to the county.

Two other items were also mentioned. The University renewed a contract for conducting tours of range creek. Jae Potter also mentioned a visit by the Community Impact Board (CIB) to Carbon County the 10th to 12th of June. The CIB will be conducting official meetings at the senior center as well as touring Nine-Mile canyon. Funds from the CIB funded the construction of the road that goes through Nine-Mile Canyon, enabling the county to collect funds from natural gas harvested there. 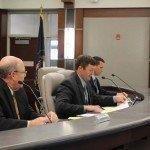 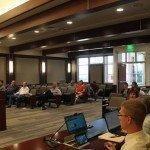 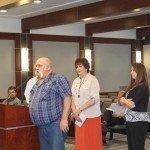 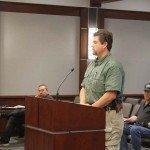