After a season full of success, including a 25-0 record, the Emery 12U team was invited to its most difficult tournament yet. The squad packed up and traveled to Nephi for its last weekend of games. Emery blew out Utah Havoc in the opening contest 16-3. The team then had a tight match with Peasant Grove, which it won 5-3.

The third game of the tournament was even closer. Tied at zero with Vasqueros, the game headed into extras. Emery had the last at-bats and put on the pressure on Vasqueros with runners on the corners. A passed ball sent the runner at third digging for home. After a close play at the plate, the runner was able to slide under the tag for the winning run. (A picture of the game-winning play is shown above.)

Emery then moved on to play Hammerz. The boys played their hearts out but came up short, 13-5. Emery finished the tournament in third place and capped off the season with a 28-1 record. “The Salt Lake and Utah County travel teams were really tough,” head coach Aric Olsen said. “We are way proud of them!” 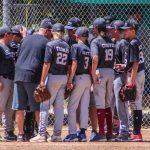 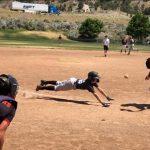