On Wednesday, the Emery County Business Chamber hosted its November Lunch and Learn at the West Winds restaurant in Green River. The guest speaker was Ricky Flores from the Utah Film Commission.

The luncheon began with a short introduction regarding the West Winds Restaurant and surrounding businesses.  Allen Burns, the property’s general manager, explained that West Winds is one of the largest employers in Green River. Right now, the business employs over seventy people. West Winds includes a truck stop, service center, 24-hour restaurant and a 42-room motel.

Chamber president Julie Jones also announced the November business of the month as Ray’s Tavern in Green River. Cathy Gardiner, the owner of Ray’s Tavern since 1995, accepted the honor at the luncheon.

Ricky Flores, the marketing and creative executive for the Utah Film Commission, spoke to the audience about the film industry in Utah. He explained that the Utah Film Commission’s purpose is to market the entire state of Utah as a destination for film. He talked about the economic impact that film has on Utah and explained that over 900 movies have been shot in Utah, and each of the films brought  jobs and revenue to the state.

The Utah Film Commission is involved in the film making process from the beginning to the end. They began by taking filmmakers to initial scouting locations and are involved in the process through the completion of the film. They provide incentives and tax credits to filmmakers who decide to bring their productions to Utah. 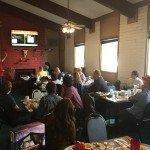 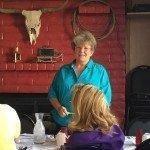 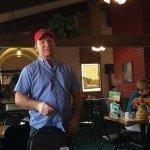