Questions asked during the luncheon were submitted via email to the chamber prior to the event. While attendees enjoyed a catered lunch, Andy Urbanik asked the candidates a series of questions submitted by Emery County residents.

The duo first had two minutes to give a brief description of themselves and their backgrounds. Van Wagoner, the current Castle Dale City mayor and the Democratic candidate, gave a description of his background in business as well as the tourism industry. Most recently, he began his role in politics in an effort to make positive changes in the local area. Sitterud, President of Mac’s Mining Repair Service and the Republican candidate, spoke of his work in the family business and his deep roots in Emery County.

Both parties expressed their deep concern for limited jobs throughout Emery County and stressed the importance of bringing in new industry while supporting current businesses would be key if they were to become commissioner.

The recreation district was one coin where Van Wagoner and Sitterud were on different sides. Sitterud explained that while the rec district does great things, other services are more important to the resident of Emery County.

“I think the recreation has to take a backseat to provide to the things the community needs for everyone,” said Sitterud. “I would like to see something worked out where recreation department is still there and they are able to do things for the county.”

Sitterud went on to explain how he believes other county-provided services take precedence over recreation services.

“It’s like things are at home. I’ve got to pay my bills and I’ve got to maintain my house and then playing comes with whatever’s left,” Sitterud said.

Other the other hand, Van Wagoner emphasized the importance of the recreational opportunities the district provides not only to Emery County residents, but also the draw it has on those looking to move to the area.

He further stressed that families and businesses looking to relocate to the area have a deep interest in opportunities for youth.

“You look at trying to bring other businesses into this community, that is one thing they are going to look at, ‘What do you have for us to recreate?'” Van Wagoner explained. “We need to show that we are moving forward, we are looking out for our youth and we have stuff for our youth.”

The Q&A consisted of a dozen questions before wrapping up with one final question, “Why do you want to be a commissioner?”

“I jokingly say that I have lost my mind and my wife hasn’t been able to find it,” Sitterud said. In reality, the commissioner hopeful explained that as an Emery County native, he finally sees the perfect opportunity to make a difference.

“I have the time that I could devote,” Sitterud said after explained that his business and personal life are both in good positions to allow more time to be allotted to the county.

Van Wagoner then took his last chance at the microphone to explain his decision to run for commission.

“I was mad,” he said. “As being a mayor and seeing what was going on in the county and in that position, I was mad. There was only one way to turn that anger around and that was to get involved.” 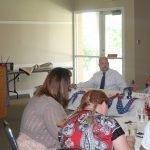 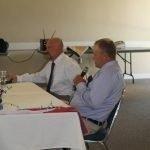 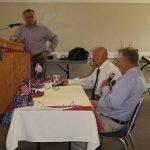 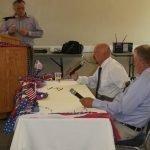 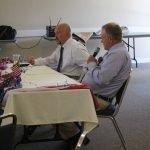 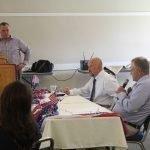