The Emery County Community Theater has been hard at work preparing for its next production, the timeless musical “Peter Pan,” based on the classic book by Sir James M. Barrie. This version of the beloved story goes all the way back to 1954 when it opened with Mary Martin as Peter Pan.

Auditions were held at the end of May and community members from both Emery and Carbon counties have been hard at work in rehearsal since that time. A true community effort, the cast and crew have been collecting props and learning lines and songs for this fun and family-friendly story about the boy who refused to grow up and his adventures in Neverland. In what may be a first for the Emery County Community Theater, Peter Pan and the Darling children even fly during this production! Talk about having an adventure!

The characters in the cast include the Darling family, Peter Pan, the Lost Boys, Tiger Lily with her dancing Indian maidens and the rest of her Indian family, and last, but certainly not least, Captain Hook and those pesky pirates! The title role of Peter Pan is being played by Angela Paskett, following the tradition of having Peter Pan played by a female lead that began with Mary Martin and continued with Cathy Rigby and Allison Williams. Peter’s adversary, Captain Hook, is being played by Andrew Pehrson, who joins the cast from Carbon County.

Audiences will have four chances to catch Peter and his flying hijinks. Performances will take place at the Emery High School auditorium on Aug. 12, 13 and 15 with performances beginning nightly at 7 p.m. and an additional matinee performance at 2 p.m. on Saturday, Aug. 13. Tickets can be purchased at the door at a rate of $7 for youth and adults and $5 for senior citizens. Children ages five and under may attend free if they come with an accompanying adult. 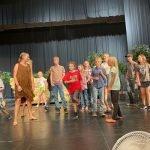 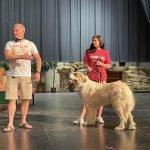 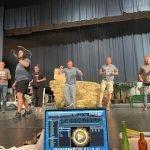 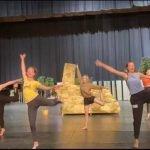