The Emery County Commission had a full agenda of items on Tuesday, May 14. The commission tackled tippage fees at the dump, sage grouse management, roads, mineral rights and many other items as they worked their way through the issues at hand.

The meeting opened with awarding Annette Allen, Motor Vehicles Office Manager, for going over and above expectations for customer service.

The county passed a resolution to adopt protection for sage grouse into its general plan. County Public Lands Director Ray Peterson explained, “this is a placeholder while the BLM and the State of Utah work out a plan for sage grouse management.”

The grouse are on the verge of being listed as an endangered species. The listing would impose some very restrictive land use policies to any area designated as sage grouse habitat.  The listing will not occur if the states involved come up with a proactive plan for protection of the species.

Emery County has several areas that are designated as sage grouse habitat. Peterson has been working with the state and BLM to work on a plan that is good for sage grouse while allowing a less restrictive land use plan.

There were two public hearings during the meeting. The first dealt with an addition to the industrial zoning regulations.  Many lands in industrial areas have separate surface and mineral right owners.

The county recognizes that those with subsurface rights have right to extract their products. The additions to the regulations will ensure that a process to protect both rights and allow for mitigation when those rights conflict.

One of the changes invokes a 250-yard buffer around existing structures. A similar change will create a buffer for existing roads, power lines and utilities. Subsurface rights will be issued conditional use permits like surface rights are currently.

The other public hearing was to receive input regarding the San Rafael River and Muddy Creek water study. Because the drainages are found completely within the western border of Emery County, it was feasible to add the drainages to the Emery County general plan. Once the plan is in place, it will have to be taken into consideration by SITLA, BLM and other land management groups.

Tippage fees at the county landfill were also discussed heavily. It was proposed that fees be set more specifically to who would be charged and for what. It was speculated that many contractors and people from outside the area were saying loads were from projects for Emery County residents so they could dump for free.

Several commissioners expressed concern that if the fees were too restrictive the county would see an increase in illegal dumping on the desert again. With limited law enforcement, it would be difficult to catch those who dump illegally.

Other matters included the approval of funds to repair broken sprinklers at the Emery County Aquatic Park. Discussion on how to prevent breaks in the future resulted in a plan to train aquatic park employees on how to blow water out of the pipes in the fall. 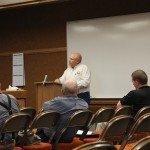 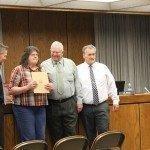 Annette Allen recieves the employee of the month award for her customer service. 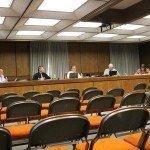