Governor Gary R. Herbert began by talking about Utah’s economy. He stated that Utah is doing very well. In fact, he reports, it has the best economy in the United States. Utah was the best producing state in the nation nine out of the last 12 months.

Governor Herbert told audience members that the American dream is alive and well in Utah. Here we believe in the free enterprise system. He gave an example of helping a family to break the generational poverty chain by educating and helping it obtain marketable skills . He added that we still have problems in Utah but we know how to work through the issues and raise the bar.

He assured Emery County of his concern for our local issues; such as the war on coal, EPA energy crunch, and public land issues.

Johnson then introduced Utah Attorney General Sean Reyes as the person who has restored integrity, honesty and transparency to Attorney General’s office in Utah. Reyes began his speech by saying how glad he was to be back in America after spending some time in Washington D.C. He spoke of his concern of government encroaching into every nook and cranny of our lives. He reminded the audience that we are sovereign states and should make governing decisions as a state. ”If you want to see the character of man, give him power,” he quoted.

Utah State Treasurer David Damschen spoke next. Damschen said one of his main jobs is to reunite people with their money. Damschen’s office has returned over $50 million through the unclaimed property division. In his dealings with his office, his main question is “Why?”  He said that every dollar the state saves is a dollar we don’t have to pay in taxes.

Johnson then introduced John Dougal as an extremely intellectual auditor. “Accountability breeds responsibility,” Dougal’s opening statement included. He cautioned about the fraud triangle and that opportunity plus pressure and rationalization bring a high risk of fraud.

James Evans, director of the state’s Republican Party, reminded everyone of the caucus meetings on Tuesday, March 22. He wanted everyone to know that if you can’t attend the caucus meetings you can still vote online. He next reported on the presidential debate that is coming to Utah on March 21. He said that there have been 40,000 requests for tickets. His office is trying hard to decide how to  fairly distribute tickets. He wants to make sure that they are evenly spread throughout the state. He realizes that this is a historic event and is trying to get the national committee to work with Utah. The venue and media coordinator have yet to be determined. He congratulated the Emery County Republican Committee for its performance and thanked them for the invitation.

Following Evans’ remarks, Roy Dean, a representative from Senator Orrin Hatch’s office addressed the audience. He told them that Senator Hatch has set a real precedence in Washington, being 81 years old and still having his finger in every political pie. This is a great advantage to Utah, something that can’t be replaced. One of Senator Hatch’s main objectives right now is to see that the next president appoints the new Supreme Court judge.

A group of representatives for congressmen seeking re-election or election were each given five minutes to speak. Spokesmen for Congressmen Jason Chaffetz and Mike Lee spoke. As did Jonathan Johnson, who seeks to unseat Governor Herbert in the next election. Chia-Chi Teng, who is opposing Chaffetz, spoke about his capabilities. Carl Albrecht, seeking election in District 70 in the Utah House of Representatives, gave his bid as well. 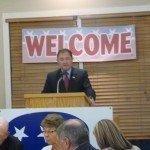 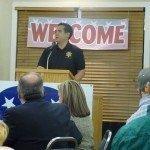 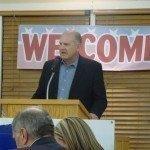 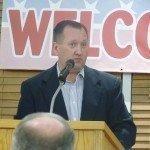 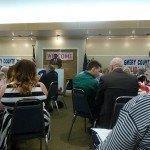 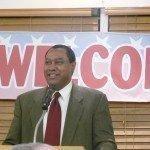 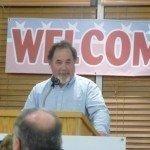 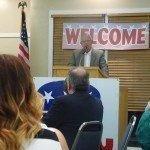