The Emery County Historical Society recently hosted its annual Cowboy Poetry event at Castle Valley Outdoors. Approximately 75 people attended and were entertained by the music of the Country Roads band in a repeat appearance. The poets this year were LoriAnn Larsen and Shem Guymon, who both recited poems by well-known poets as Baxter Black.

At the event, Evelyn Huntsman was honored with the annual award for preserving Emery County History.

Evelyn Huntsman was born in Orangeville to Morris and Maree Peacock. She loved sports and played on the Orangeville team where they would compete with the other towns in the county. She also spent many years later in life umpiring softball and refereeing for volleyball.

Evelyn began as a true Orangeville girl. She has a rich legacy in the Cottonwood Creek area, Orangeville and Castle Dale. However, she has made herself a Ferron girl by serving and getting involved in the community of Ferron.

Evelyn has a vast number of talents. She started singing harmony with her sister, JoAnn, as an alto when she was only five. JoAnn was usually playing the piano by ear and Evelyn sang along with her as they performed together in funerals, programs, church and at bonfires when the soldiers would leave for WWII. She continued to love to sing and perform, and she was part of a quartet that sang together for about 10 years, as well as a trio which she truly enjoyed.

Evelyn is also proficient on the piano and taught for over 40 years. She received a scholarship from Standard Oil in 4-H upon completion of high school. She graduated from South Emery High School in 1956 as her class’ valedictorian. She won the Emery County Dairy Princess, which some years later turned into the Miss Emery County Pageant. She received a Bachelor of Science in Economics Management of the Home and Housing Design from BYU in 1960.

Evelyn served for several years on the Emery County Library Board, which was established to work with the increased population in the county. Evelyn and the committee insisted that every city in Emery County get a new library.

Evelyn has held many positions on the Emery County Historical Society Board as well, including President Elect, President and Secretary as well as serving as a board member for at least 15 years. She has also been an active member of the Daughters of the Utah Pioneers for many years and has served at both the local and county level. She continues to volunteer at the Emery County Archives

Evelyn considers the opportunity of compiling the histories for Ferron and Molen for the book “Ferron, A Peach of a Place” one of her greatest accomplishments. She started compiling this book in 1991, and it was published in 2004.

The preface of “Ferron, a Peach of a Place” gives insight into the enormity of this task. It began when Evelyn envisioned the book and began the long, time-consuming process of collecting, typing and storing a vast amount of research into computer files and documents. Evelyn worked closely with Roma Powell researching and writing the manuscript.

The book discusses the “many dramatic changes that have taken place in Ferron from its geological beginnings to the present era of time.” As a result of Evelyn’s dream, many old pictures that might otherwise been lost to future generations have been collected, identified and captioned. Hundreds of personal histories have been recorded and preserved. Through a grant from the Utah State Historical Society, the photos found in the book are available in the Emery County Archives.

The next Emery County Historical Society activity will be on Sept. 26. Ed Geary will be leading the group to visit the site of Consumers and other abandoned mining towns in that area. 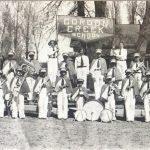 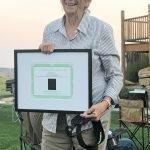