Starting the evening off right, Kaicee Lynn, aged 13, and Kodee Michelle Behling, aged 11, delighted the society with “Don’t Sit Under the Apple Tree” and “L-O-V-E.” They are the children of Stephanie and Dane Behling of Ferron.

Then, Matheson, currently the Utah State Director of the Old Spanish Trail Association and board member of the Southern Utah University Aviation Program, began his lecture by inviting the three veterans in attendance to stand. After applause to honor these people who have served our country well, Col. Al explained that it is now appropriate for veterans to salute the flag during the Pledge of Allegiance.

Honoring veterans, he continued, gives us a greater appreciation of the “freedoms we have, and the places they’ve been.” With emotion in his voice, he expressed the pain that can only be felt “having a comrade die at your side” in battle. Veterans returning are not always appreciated or given thanks, but those who participate with associations of vets and support networks have little or no PTSD and emotional difficulties. As a society nowadays, we don’t truly understand the sacrifice of these men and women.

Transitioning to his topic for the evening, he said, “Our society has developed a habit of being deceitful…and moved toward an intolerance to tolerance.” He cautioned the group that this is society, not government. He also noted that we have a “political process that we don’t access.”

He said there was an active 5th Column in the United States that worked to keep us out of World War II. One of the best-kept secrets of the war was a Japanese air offensive on the US mainland using fire balloon bombs. These were engineered for delayed ignition and started fires. Some of them actually reached Utah, as near as Loa, Bicknell and Delta. The public was never advised of what was happening. Among other “mysteries” he shared with guests were these incendiary bombs and Tonapah – Area 51.

Intrigued by rumors of a bomber crash during his childhood – no survivors/no remains, no fuel, no fire, no acknowledgement that the crash ever occurred – Matheson’s interest in history led him on a 12-year search for answers.

From a chance encounter in a barbershop in Cedar City, in 2013 he discovered the crash site in the mountains above Cedar City, Utah. Here, he saw the area where trees had been sheared off as the bomber came in. Looking around to find remnants of the airplane, he discovered a part of the plane with a serial number. Further research led to the identification of the only airplane with that part and finding the truth behind the varied stories of the plane, including the missing Top Secret Norden bombsight, crew men, supplies and fuel.

Col. Matheson summed up the existence of “Spies, Lies, and Counterfeit Ghosts.” In essence, where there is a lack of information, people make up stories that answer what they believe.

As refreshments were being set out, Matheson closed the evening with an interesting question and answer session. He also mentioned that he had brought silhouettes marking the Old Spanish Trail to install at the Rochester Panel.

Many thanks were extended to Col. Al Matheson and the Behling songsters for a great Veterans Day.

Be sure and join us for Emery County Historical Society’s next meeting, the “Antique Show and Tell,” in January. Both society and community members are invited to share the interesting relics that give tribute to days long past. See you there! 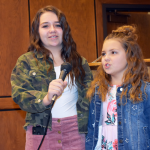 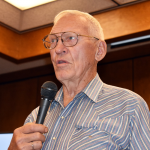 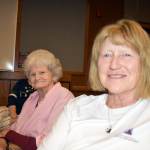 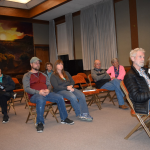 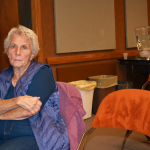 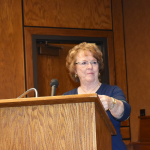 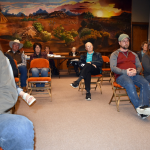 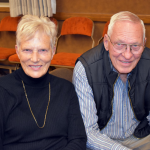