The Emery County Historical Society met at the Buckhorn Wash kiosk on Saturday morning to take a trek down the wash. Trek guide Edward Geary explained the significance of the wash as a travel corridor for as long as humans have inhabited the area, even dating back to The Spanish Trail days.

The M-K Tunnels site was the next stop for a view of the tunnels and a history lesson about the Department of Defense’s use of the area in 1948 as a possible site for defense operations or storage in the event of a nuclear attack. Just down the draw is Ruin Arch, which can be seen from the tunnel kiosk.

A three-toed dinosaur footprint can be found on the rock shelf further down the wash on the left side of the road with Waterhole Canyon petroglyph on the opposite side of the draw. During the historical presentations at each stop, the visible geological formations were shown to the members and friends in the group.

The next stop featured petroglyph panels among the ledges accessible with just short hike. Although a rock slide has almost blocked the entrance to Sid’s Pasture at this stop, the history lesson told of the Swasey bunch and that the canyon was named after Sid Swasey. It also packs the legend of the Wild Bunch.

Farther down the draw, Matt Warner left his signature and a drawing on the rock along the road. Some pretty colorful stories were shared at this stop from many in the group. The most notable and well-known site down the wash is the Buckhorn Pictograph Gallery where the society met many other visitors to the site. 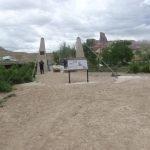 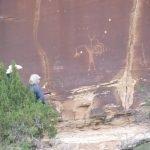 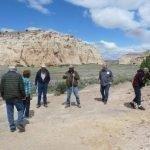 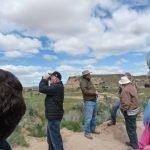 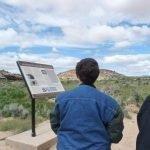 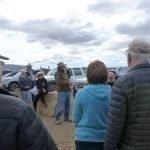 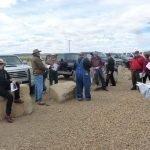